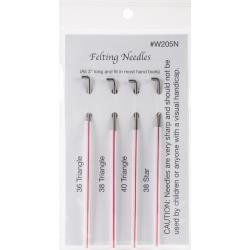 Felting needles are barbed needles used to interlock wool fibers. As the felting needle is moved up and down, the barbs on the needles catch the scales of the wool and entangle them creating a material called felt.